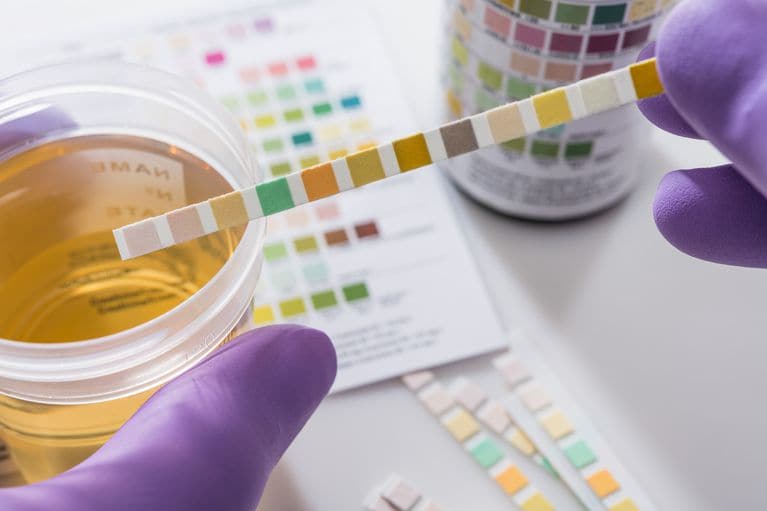 New tests may help those with persistent urinary tract infections

In 2015, Jessica Price, a 29-year-old Air Force veteran in Illinois, started experiencing urinary tract infection symptoms, including an unrelenting urge to urinate and bladder pain. But standard dipstick testing, where a doctor dips a plastic stick into a urine sample to check it for signs of bacteria, kept coming back negative. Based on her symptoms and the negative tests, doctors told Price she had interstitial cystitis (IC), an incurable syndrome of unknown cause and suggested several invasive procedures that only worsened her pain.

“I was on more medications than I can remember, none of which helped and some which made the symptoms worse,” she remembers. “The urologists told me things such as, ‘This is just like having blue or brown eyes; you were destined to have it.’ ”

But when a nurse practitioner turned to a new type of test that used DNA analysis of her urine, she found bacteria she said was abnormal, and Price began two years of antibiotic treatments that after some time finally brought her relief.

Urinary tract infections are one of the most common ailments women encounter, with at least 40 to 60 percent of them getting one during their lifetime, according to the National Institutes of Health. Usually, they’re diagnosed with a dipstick analysis like the one Price took or by sending the urine sample to a lab to look for bacteria. In most people, a course of antibiotics resolves the problem quickly. But for some people, like Price, the agony persists even when testing shows nothing, and the pain and urgency become chronic.

Pain but nothing on tests

The National Institute of Diabetes and Digestive and Kidney Diseases reports that “IC is common. The condition may affect between 3 million and 8 million women and between 1 million and 4 million men in the United States.”

Though there is no standard treatment for such cases, David Kaufman, a New York urologist specializing in treating bladder and pelvic pain, says he believes new tests could help many people get diagnosed and treated.

“I think the failure . . . to diagnose these patients definitively with chronic, low-grade infections is a result of the inability of [the standard] two-to-three day commercial cultures to identify the infection. This will hopefully soon change as labs begin using molecular systems to identify microbial DNA and RNA in urine,” Kaufman says. “I do think the DNA sequencing testing is going to be a game-

Part of the problem with standard UTI culture tests, which came into use in the 1950s, is that they can only grow bacteria for 24 to 48 hours, since they use solid agar cultures, he says. This means infections caused by small amounts of bacteria may not grow enough for doctors to detect them. While Kaufman doesn’t use DNA tests because they’re not yet licensed by New York state, he uses another new test called liquid broth cultures, which lets bacteria grow for eight days.

“Dipsticks and cultures are being advocated in protocols and guidelines all over the world, so those guidelines are hopelessly deficient,” Malone-Lee says. “It is women who pay the price being denied treatment and told that they do not have a UTI when they do have a UTI.”

A 2017 study of 306 women (220 with UTI symptoms and 86 without) published in Clinical Microbiology and Infection found that 1 in 5 women with UTI symptoms had negative results on the standard tests, yet a DNA analysis test found E. coli, a bacteria known to cause UTIs, in 96 percent of the symptomatic women’s urine.

For a small study published in December 2018 in the Journal of Clinical Microbiology, University College London researchers used both the standard urine culture test and a DNA test on 63 people (88 percent of them women, as most UTI patients are female) diagnosed with UTIs based on symptoms and white blood cells in their urine, along with 29 UTI-free controls. It found that the standard test “failed to detect a variety of bacterial species” including ones recognized as “uropathogens” and couldn’t distinguish between the urine samples from the symptomatic people and the controls.

Despite such results, Malone-Lee, one of the co-authors of that 2018 study, says he thinks it’s too soon to be using DNA analysis and broth culture tests for diagnostic purposes since it’s not clear which bacteria may be naturally occurring in the bladders of people being tested. As a result, the bacteria identified by these newer more sensitive tests may not always be causing infections.

The DNA tests are also not widely available and usually cost $200 to $800 out of pocket when they are. Insurance won’t cover them because there isn’t yet sufficient data to prove they are better than regular cultures, says Jennifer Linehan, Santa Monica-based urologist and associate professor of urology at Providence Saint John’s Health Center.

“It is possible that [DNA testing] will change the way UTIs are managed, as the current approach of dipstick urinalysis and urine culture are not comprehensive enough to identify all microbes that require treatment. However, we are not there yet,” says David Fishbein Yao, a urologist and researcher at the Ronald Reagan UCLA Medical Center. So for now, “the standard testing for UTI with urinalysis and urine culture if the urinalysis is abnormal is the best method for diagnosing UTI.”

Malone-Lee instead has returned to a diagnostic method in use from the 1920s up to the 1950s: As soon as a urine sample is provided, he uses a microscope to check it for white blood cells, which the body produces to fight infections. Both the standard and newer tests look for white blood cells, too, but because it takes time to send the urine to the lab, those cells have burst and dissipated by the time they get there.

But Malone-Lee acknowledges that, as with the DNA and broth methods, microscopy is not a perfect solution. A lot of doctors don’t have the proper training to do the in-office analysis, he says. And Kaufman says that seeing white blood cells is not always determinative since “not all white blood cells in the urine are there because of a UTI. Often, they are there simply because of contamination of the urine sample.”

Lauren Szylarski, a 35-year-old communications manager in Edinburgh, Scotland who had chronic pain and other symptoms, was told she had IC but was eventually diagnosed with chronic UTI by Malone-Lee using fresh-urine microscopy. After taking antibiotics and the antibacterial drug Hiprex for over a year, she finally feels symptom free.

“I went from living my dream life to sitting day in and day out on my parents’ sofa, struggling to cope with the pain, googling symptoms and treatments, making excuses to not see friends, not eating or sleeping and taking too many pain medications,” Szylarski remembers. “I didn’t have a life. The fact that I could no longer look after myself, or even make my own money, was terrifying. I thought that this was now my life, at 33 years old, for the rest of my life.”

Sheela Swamy, University College London obstetrician and gynecologist who was the lead author of the 2018 study, has calculated that patients suffered on average 6.4 years before coming to her chronic UTI clinic, which uses fresh-urine microscopy analysis.

Regardless of their method of choice, many experts believe doctors should entertain chronic UTIs as a possibility before using IC as a diagnosis.

Linehan says she now routinely does DNA analysis for patients who come in with chronic urinary pain. In the past, she would have to guess based on a patient’s red or white blood cell count or responses to antibiotics.

Based on patients’ test results and responses to treatment, Kaufman says he believes the majority of people who come to him with chronic bladder pain and have been told they have IC in fact have chronic UTIs. However, he acknowledged that some chronic bladder infections, if left untreated, can lead to IC, which is why it’s important to identify and treat infections early

America Ramirez, a 38-year-old banker in Georgia, developed the bladder lesions characteristic of IC after several months of living with a UTI.

She said the pain persisted for 10 years, causing marital issues and depression before she finally traveled to England to be seen by Malone-Lee. “Why is a test so simple [as urine microscopy] not done by all urologists here in the U.S.? Why do we not check DNA or let urine cultures sit for a longer period of time to see if bacteria really are there?” she says. “I wish that instead of just telling me over and over that there was no cure for what I had and that I just had to live with pain, I would have had more choices in finding out the root of my problem.”

As for Price, after two years of being unable to focus on anything other than her incessant urge to urinate, she now feels 80 percent better. She uses the bathroom 8 to 12 times a day, rather than 20 to 30, and is able to travel and perform daily tasks like grocery shopping again. “Two years ago, I couldn’t foresee a life outside of my own home,” she says. “My bladder no longer controls my mind, my actions, or my lifestyle. I’ve gained my life back.”